AEROSPAIN, the AERONET Central Facility in Spain, is a calibration center of the NASA’s Aerosol Robotic Network, a global network of sun-sky-lunar photometers to monitor aerosol properties and provide satellite validation. Only 4 calibration centers of this global network exist worldwide: USA, France, Spain and China. AEROSPAIN is jointly managed by the Izaña Atmospheric Research Center (IARC) of the Meteorological Agency of Spain (AEMET), and the Group of Atmospheric Optics (GOA) of University of Valladolid (UVa). Since 2006, and following the AERONET protocols, field instruments are calibrated by GOA-UVa at Valladolid, Spain, whereas network reference instruments are calibrated by AEMET at Izaña in Tenerife, Spain. 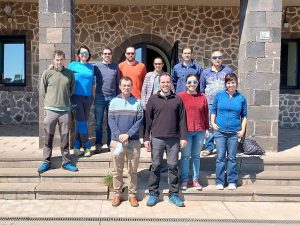 Staff from AEMET and GOA-UVa during a coordination meeting at the Izaña Observatory in September 2021.

Background on collaboration and official agreements

The solid background that has favoured the establishment of AEROSPAIN as a pillar of AERONET Europe and ACTRIS RI will be listed below.